UK I love you! 4 consigli di viaggio per voi 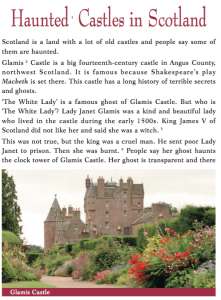 “Scotland is a land with a lot of old castles and people say some of them are haunted.
Glamis Castle is a big fourteenth-century castle in Angus County, northwest Scotland. It is famous because Shakespeare’s play Macbeth is set there. This castle has a long history of terrible secrets and ghosts.
‘The White Lady’ is a famous ghost of Glamis Castle. But who is ‘The White Lady’? Lady Janet Glamis was a kind and beautiful lady who lived in the castle during the early 1500s.” 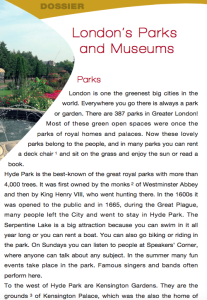 “London is one the greenest big cities in the world. Everywhere you go there is always a park or garden. There are 387 parks in Greater London! Most of these green open spaces were once the parks of royal homes and palaces. Now these lovely parks belong to the people, and in many parks you can rent a deck chair and sit on the grass and enjoy the sun or read a book.” 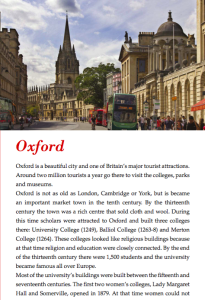 “Oxford is a beautiful city and one of Britain’s major tourist attractions. Around two million tourists a year go there to visit the colleges, parks and museums.
Oxford is not as old as London, Cambridge or York, but is became an important market town in the tenth century. By the thirteenth century the town was a rich centre that sold cloth and wool.”

Village in The UK 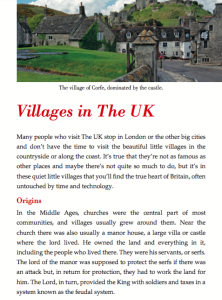 “Many people who visit The UK stop in London or the other big cities and don’t have the time to visit the beautiful little villages in the countryside or along the coast. It’s true that they’re not as famous as other places and maybe there’s not quite so much to do, but it’s in these quiet little villages that you’ll find the true heart of Britain, often untouched by time and technology.”